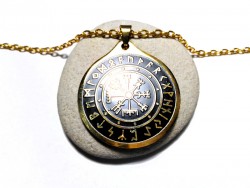 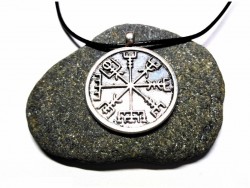 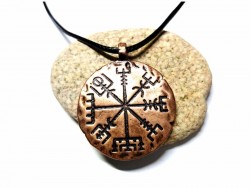 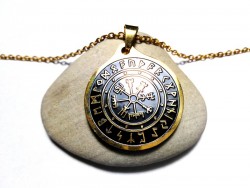 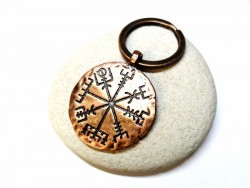 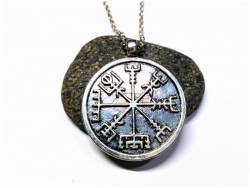 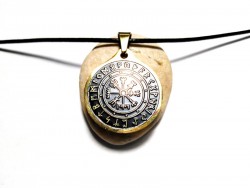 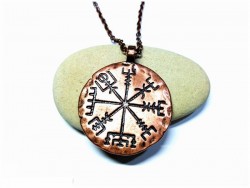 The staff of runic magic Ægishjálmur ("helm of terror") is composed in particular of the rune ᛉ Algiz, rune of protection associated with the spear of Odin.
This motif appears in the Galdrabók.

To invoke his protective power and frighten his enemy, one wore the painted rune on the forehead, the nose of the helmet or the shield. It therefore had to be clearly visible in all cases.

The runic magic staff Vegvísir ("which shows the way") is made up of many runes that allow the wearer not to get lost and to find his way back, something very important when sailing in the open sea.
This is why it is called the Viking compass or compass rose.
This motif appears in the Huld Manuscript.

The rune being very complex, it is often simplified as in the metal pendants presented on these pages and the magic associated with the set may not be fully operational.
If like the famous singer Björk you wish get a tattoo of this pattern, be careful not to follow the many examples you will find on the net!

La Blanche Hermineworks if possible on original documents (digitized of course) such as manuscripts or coins for example, which makes it possible to provide reliable information.

The Galdrabók ("Book of Magic" in Icelandic) is an Icelandic manuscript dated around 1600 AD which lists spells and staves of runic magic, including the Ægishjálmur runic magic staff.

The Huld Manuscript is an Icelandic manuscript produced in the second half of the 19th century that compiles both different Norse alphabets (or runic, the Futhark) and several runic magic sticks, including the Vegvísir staff of runic magic.